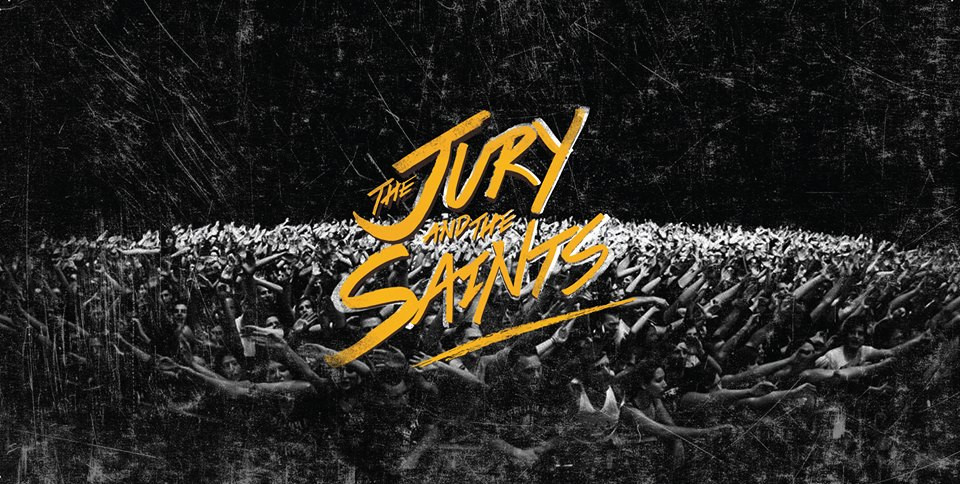 The Jury & The Saints have been busy the last few years. Since forming in 2009 they’ve toured with Paramore, made a couple of EPs and an album, signed with German label SPV, and just recently they put out their second full-length release, which they recorded in Germany with rock producer Alex Lysjakow. I sat down with singer Jesse Smith and guitarist Rowan Crowe to drink watered down coffee and talk about life as international musicians.

The band recently toured in Germany, before recording an album in Germany, for the label they’re signed to in Germany. I had to ask: what’s up with these guys and Germany?

To hear Rowan tell it, it seems more chance and opportunity than any planning on their part. “It’s funny, it just happened to be over there that they loved the music – you know it’s big choruses and gang singing and rock music, I guess.”

“Apparently because there was a bunch of stuff coming out of New Zealand that was good, every week they’d check the New Zealand charts,” Jesse says. “And because we were punky kind of rock they thought ‘oh yeah, this could work.’”

The Jury & The Saints signed with SPV at the beginning of 2013, and then in the middle of the year the band went to Germany for six weeks. Three weeks of touring (playing to 6,000-strong crowds with a Deutschrock band they assure me you’ll never hear of outside of Germany) was followed by three weeks recording what would become their second album, a life experience Jesse says he’ll never forget. “We ended up in a tiny town just outside Berlin for three weeks, staying at this weird little hotel just round the corner from the studio. The landlady didn’t speak a word of English, and was an alcoholic – so it made for very interesting conversation.”

The band didn’t know Lysjakow before they recorded with him, and it was the label’s suggestion that they work together. “But we were psyched with what he did,” Jesse tells me. “He produces a lot of rock,” says Rowan, “and coming from a punk background I think he gets it more. It needs to capture that energy, that essence of what it is, or else it’s …” he gives an exaggerated shrug.

It seems like they’ve managed to capture that energy – the album has been well received overseas. Along with the interest in Germany there have been high-scoring reviews from magazines and websites like Kerrang, Rock Sound and AltCorner. But the positive buzz overseas can feel oddly distant when the band’s back here in New Zealand. “It’s one of those things where it feels like you’re having a dream at night and then you wake up the next day,” says Rowan. “It doesn’t feel like reality. You get these things from the label saying ‘this is incredible that you guys got this!’ But when you’re here it doesn’t feel like it’s happening, so you just go [shrug] – oh welp, guess I’ll keep cleaning windows!”

Their bio describes TJATS’ sound as ‘stadium rock’, but their pop-punk roots aren’t far from the surface. Jesse was in Streetwise Scarlett while Rowan played in Goodnight Nurse, two of the bigger bands in New Zealand’s mid-2000s pop-punk scene. As Jesse puts it: “pop punk was just slowly fading out back then. Now we’re trying to resurrect it. We gave it a break, rewrote it, let it mature and we’re taking over again.”

They’re open about their enthusiasm for the genre. “Pop punk’s still my favourite because it’s so happy,” Rowan says. “It just makes you want to have fun. But then hardcore has that aggression and energy that no other genre has.”
And while their tastes these days include bands like Brand New and Balance and Composure, one of the big names that comes up as an influence is Blink-182.

“It’s not like we sound like them, but it’s the influence of just … being silly, you know? Having fun,” Rowan explains. “I like that instead of people trying to be cool or real serious about it, they just have fun and do it. And for me, how they’d just be silly when they play live – I love that. I think that’s a big part of how we started as well, just silly and fun. I guess we’ve got better at playing since, and actually focused on that, but also on putting on a really fun show so people leave going ‘I had so much fun tonight’. That’s what I want – I want people to come and actually feel like they had a good time, instead of feeling like they came and watched a band that was trying to get more famous.”

Jesse adds: “We want to put on a show that if someone comes and they had to bring their mum because they were too young or something, the mum would have a good time as well. Even if she didn’t like the music, she could have a good time anyway. We’re not super precious about being … something, we’re just trying to create a good time for people, I guess.”
And good times on stage for themselves, too. Like the time they threw sausages out into the crowd and got told off by Paramore’s tour manager. Or the time Rowan shot Jesse in the face with a confetti cannon. “It was such a mess. The problem was that we’d already thrown out the sausages, and so people were throwing everything back on stage and it was mixing raw sausage with confetti… it was like PVA glue everywhere.”

Despite the goofing and mess-making on stage the band tries to stay down to earth, balancing the music and touring with real life. Three of the four band members have families, and have to balance rock & roll with being husbands and dads. But Jesse denies that there’s any contradiction between making shouty punk music and having small children. “If you’d met my children it’d make sense. They’re all insane,” he laughs. “But for me the idea of musicians having to be these young dudes with no wives or kids to be cool is something that I want to destroy. I dislike that ‘rockstar’ idea, so I’m happy to go against the grain, you know? I think part of what I want to do is just be a normal dude but also do what I love doing – and not let music control my life and every single aspect.”

Straightforward enough. But the tone seems like it’s threatening to get to deep, so we go back to joking about watery coffee and sausage throwing, and not too long after that Jesse and Rowan have to go back to work.